Admiral named the 23rd best workplace in the world! 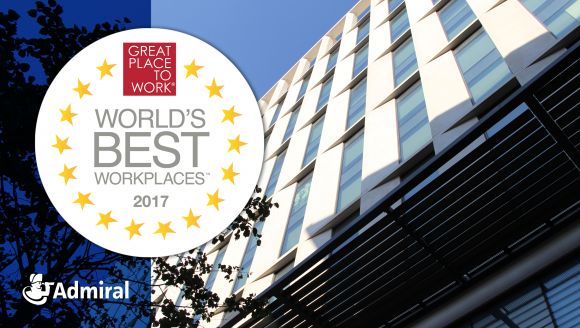 We’re proud to announce that we’ve been named the 23rd best workplace in the world in the seventh annual 25 World’s Best Workplaces list.

More than 10 million employees from 6,600 companies around the globe participated in the survey process for the World’s Best Workplaces list. The ranking assessed employees’ views on leadership, organisational culture, and trust. We qualified due to a number of our operations around the world making the Best Workplaces list in their respective countries. We were also named as the 6th Best Multinational Workplace in Europe earlier this year by Great Place to Work.

Great Place to Work’s World’s Best Workplaces create cultures that are welcoming, friendly, inclusive, and ethical. An overwhelming majority of employees at the World’s Best say they’re proud of their workplaces.

CEO, David Stevens, commented, “We’re immensely proud to be named as one of the World’s Best Workplaces for the first time. Our culture is intrinsically linked to our success as a business and it’s gratifying to see that our staff, not just in South Wales but around the globe, think we’re a Great Place to Work. Whether based in Cardiff or Seville or Rome or Halifax, Canada, all our staff have a huge part to play in making Admiral the business that it is, and I thank you all for your hard work and commitment.”

Great Place to Work’s CEO, Michael Bush, added, “The organisations on this year’s World’s Best Workplaces list represent the best of the best. They are at the vanguard of the FOR ALL movement, working to maximise the potential of everyone in a way that’s better for the business, better for the people and better for the world.”

If you fancy working for one of the best workplaces, take a look at our current vacancies.